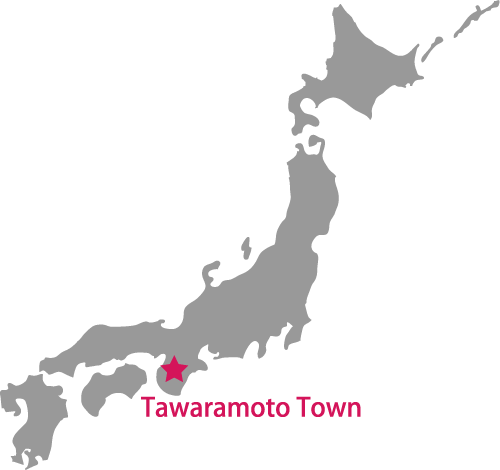 About Tawaramoto In the center of Yamato Located in the center of the Nara basin, with a population of around 32.000, Tawaramoto is surrounded by fields, and you can find the original scenery of Yamato. There are also many important cultural properties, archeological sites and shrines and temples. It is also said that it is the place of origin for "Noh" and the birthplace of "Momotaro". Here, you can visit the Muraya Shrine, located in the only remaining ancient spiritual forest in the Nara basin, which is considered to be the annex of Omiwa Shrine, said to be the oldest shrine in Japan, and ever since ancient times it has been said to be good fortune to visit both these shrines. In addition you can experience what has been called "a return to the origin", as Tawaramoto is surrounded by mountains like Mt. Miwa and Mt. Nijou, and is home to historical spots such as the Karako Kagi Remains, a national historic site that was a moated settlement in the Yayoi period 2000 years ago, and the Makimuku Ruins, said to have been a part of the ancient Yamatai country. Furthermore, Tawaramoto is also the place of several "beginnings" with regards to foodstuff. Being the place of origin of the Yamato rice cultivation as well, you can see a magnificent view of swaying ears of rice in the autumn. In addition, 90% of the cultivated watermelon species distributed nationwide are native to Tawaramoto, and there has been discovered plenty of seeds of small "ancient peaches", said to dispel evil spirits,in the local ruins. Tawaramoto is the birthplace of brewing and the origin of agriculture and food culture. 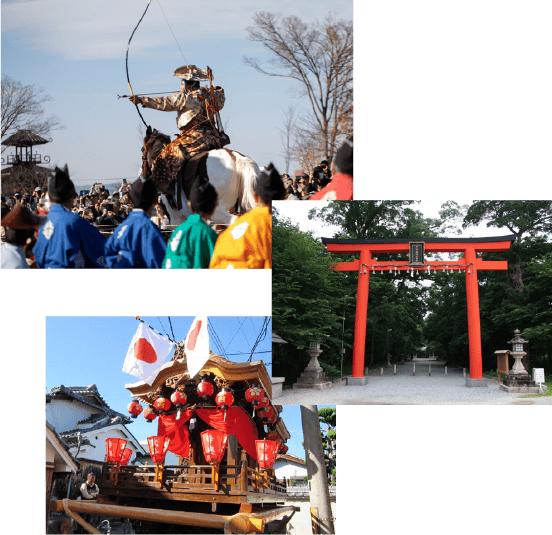 The Karako Kagi Remains The scenery and life of the Yayoi period,right here and now 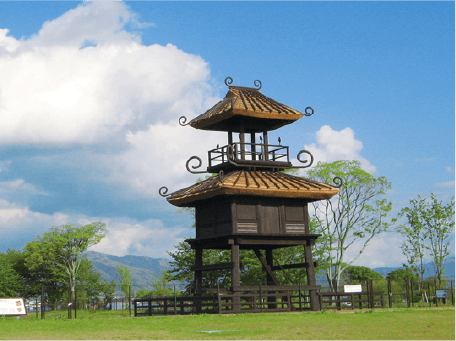 The Karako Kagi Remains are the remains of a Yayoi period settlement that was surrounded by a multilayered moat (a device to protect the village from flooding and enemies). The settlement existed continiously for 700 years, from the first half to the second half of the Yayoi period, and at its peak, it spanded over a large area of about 420.000 ㎡ (equivalent to 10 Koshien baseball stadiums). A large number of relics, such as the remains of large buildings, earthenware and magatamas (comma-shaped beads) of jade, have been discovered here. In addition, there has also been found items brought in from various parts of Japan, telling us that there was already widespread exchange across regions during this period. Because of this, it can be believed that these remains were home to a settlement that possessed the most advanced technology at the time, and played a leading role in the Kinki region. As it is an extremely important archaeological site for research on the Yayoi period, a central part of the archaeological site was designated as a national historic site in 1999. The building "Rokaku" that was drawn on a shard of earthenware found in the remains was restored in the south-west corner of the agricultural reservoir "Karakoike (Karako Pond)" built in the Edo period. This building has become the symbol tower of not only the remains, but also of Tawaramoto. Cherry trees planted by local residents surround the pond, and in the spring, you can see the Rokaku tower decorated with beautiful cherry blossoms.

These are the shrines listed in the Engishiki Shrine Register compiled in 927: Oonimasumishiritsuhiko Shrine (commonly called Oo Shrine), where Yasumaro Oono, who compiled the Kojiki, is enshrined. Muraya Shrine in whose forest grove ancient traditions are still alive. Ike Shrine, with its stunning autumn festival floats. Kagamitsukuri Shrine, which holds the "Sanshin-Nijyu Mirror", a sacred treasure considered one of the highlights of ancient mirror making. 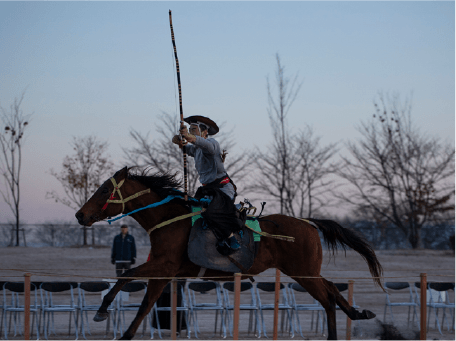 Yabusame (mounted archery) is said to be one of the performing arts where the participants try to entertain the deities by showing off their techniques, and there used to be a custom that samurai offered their yabusame performance at the "Kasuga Wakamiya On Festival", held at the Wakamiya Shrine, an auxiliary shrine to the Kasuga Taisha shrine. Among the participants there was a group of samurai ("bushidan") called the "Yamato Roku group", and there was also a group of samurai from Tawaramoto Castle called the "Hasegawa group". A major mamber of the Hasegawa group was the "Hokiji group", said to have been based in the current Hokiji settlement, and it is described in the historic book "Nagakawa Yabusame Journal"(1384), that this group performed Yabusame at the "Kasuga Wakamiya On Festival". As time went by, the samurai groups declined, but it was recorded in a survey report from 1672 (the beginning of the Edo period) that Yabusame was performed at a festival at the local Tenmangu shrine (currently Ike shrine). Through the Yabusame being performed at the Karako Kagi Remains Historical Park, you can experience the endless history of this town, from the Yayoi period, through the Middle Ages, to today. 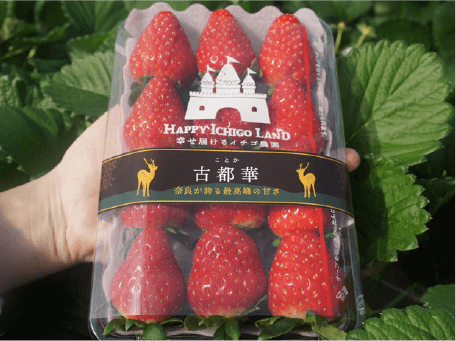 Located in the center of the Nara basin, Tawaramoto has a climate typical for valleys with hot summers and cold winters. Being blessed with rich soil, agriculture is a major regional industry. Rice farming has been the main crop for almost 2000 years, as we can understand from Yayoi period settlement remains (the Karako Kagi Remains), but also eggplants, spinach, strawberries, "Ajimaimo"(a relative to the taro that has been certified as a traditional vegetable of Yamato), kaki-flowers, figs etc. are being cultivated here.